There have been many faces to the Eurovision Song Contest. When I was a kid, it was a singer or two on a regular stage with a camera, a spot light and a live band. Pop song made its entry into the competition with Abba as did major styling. Then came the years of trying to repeat Abba’s success and write real pop songs. It never really worked. The songs had a unique knack of being either emotional ballads of a kind that you will only hear in this contest or kitchy pop-like songs that you would also only hear in the competition.

In the 80’ies at least in Denmark you were in danger of becoming a social outcast if you admitted to liking the songs and for some years we saved our money and didn’t participate. Then slowly it turned. Year by year the love for the song contest has grown as has the number of participating countries until reaching the popularity of today. The winning country has huge budgets for hosting the event, the stage shows include ice skaters and this year around 180 million people are expected to be watching.

Images in this post are all from Basim’s rehearsal today – the Danish contestant. 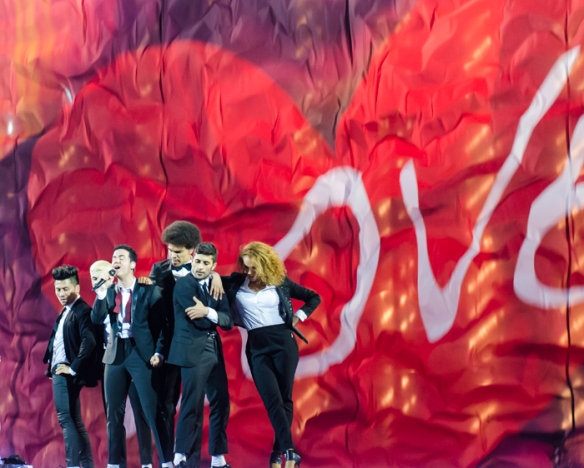